After leading a police career said to read like a fiction thriller and rising through the ranks on merit, in 1921, Joseph and Mary Ann Bolton’s eldest son, Inspector Harry Bolton, became head of the New South Wales Mounted Police and the Police training depot in Sydney. Under Harry’s direction the NSW Mounted Police gained a reputation as one of the best mounted forces in the world and many firsts in modern policing were introduced. Harry’s last official duty before his retirement in 1927 was to lead the mounted escort for the Duke and Duchess of York, the future King  George V and Queen Elizabeth, for the first opening of Parliament in Canberra.

Harry had gained fame for several feats in his early career, one notable achievement being the “Hetherington Murder Case”. In 1903, Harry was the local copper at Kiandra, an isolated town high in the snowy mountains. Along with pioneering skiing and snowboarding in Australia, the Snowys were home to several goldmines, in one of which a local man, William Hetheringon, held shares. When Hetherington died in 1903, the local coroner ruled his death as being due to natural causes. Police officer Bolton, however, believed differently and after he gathered relevant evidence, an inquest was held during which the finger of suspicion pointed to Hetherington’s wife, Jane. Harry succeeded in persuading a judge to have Hetherington’s body exhumed. The local medico having removed the stomach contents and other tissue, Harry maintained the chain of evidence by personally delivering it in sealed jars to the government analyst in Sydney, where enough strychnine was found in Hetherington’s body to kill him several times over. Following an intensive trial, Jane Hetherington was found guilty of murder and Harry gained fame for bringing one of the first cases in which a capital conviction was secured on circumstantial evidence alone.

Written by Inspector Bolton’s great-great-niece, the “Hetherington Murder Case” is covered in detail in “The Boltons of Ginninderra”, in which is also found an insight into policing in New South Wales in the 19th and early 20th centuries.

The pages below, extracted from “The Boltons of Ginninderra”, contain reproductions from newspaper articles freely available on Trove, the National Library of Australia’s historical newspaper archive.

Content Warning – Indigenous Australians should be aware that the following extract contains images of deceased people. 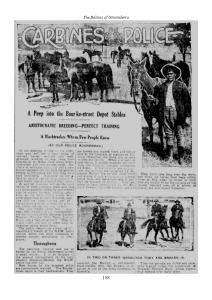 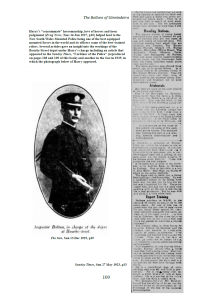